When starting up the engine it just cranks and
clicks really loud, will not start.  My girlfriend
purchased a Honda Pilot 2017 brand new, a year
later with 40k miles in.  The car has a problem
starting up.  I had to jump start the car and get the
battery analyzed at Battery Plus, they told me the
battery is still GREAT!  Well guess what, we got
stranded again because it wouldnt start.  I called
the Honda Boyte service team and they gave me a
tow truck number that is out of commission
because his truck broke..........and unfortunately
Honda Boyte wont cover her car because warranty
is 3yrs 30k miles whichever comes first.   Come
home to find out my niece has a problem starting
up with her new 2017 Honda CRV as well!!!  They
said her battery was also good!!   I did some
studying and come to find alot of people are
having issues starting up their Honda 2016/2017
push start.  Does anyone else have this problem?
We invested over 20k in a brand new car and not
even 2 years old we have maintenance problems?
i have 4yr Toyota 100k with ZERO problems.
Something is wrong with this picture, if you have
this same problem Call or txt me at (601)595-1261.
This recalls a Class Action. 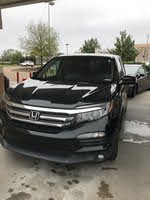 Yes, others owners have had this issues. Is your brake pedal hard? The fix is to replace the vacuum booster hose and check valve.

Thank you Tdoby, that sounds like the answer. Because the screen would flicker and indicate low brake fluid, but when I check the brake fluid it was completely full. Damn you’re good. If you had reddit I would buy award points. Thanks again.