What is the best fuel octane for the spider 124.

What is the best fuel octane for The fiat 124.

beatupchevy answered about a year ago

different octanes have the same potential energy , if the motor knocks , which I doubt , then use a higher octane . Years ago this guy was saying "get aircraft fuel and your car will go faster " well aircraft fuel is kerosene , and it does have a very high octane , but don't put it in your tank

Manufacturer recommends Premium. That would be 91 Octane, or 91 Octane equivalent with ethanol, which is most pump gasoline today... If someone recommends aircraft fuel, I don't think he's talking about Jet Fuel which is actually sub-kerosene. He's probably talking about Avgas, which is still 96 octane, ethanol free, but is still LEADED. Don't use it in cars. You can get racing gas at a track, which is 96 Octane, ethanol free. ---------- My Simple Tutorial: Gasoline 101 ---------- I built racing engines in the "60 and learned a lot about fuels in engineering school. Gasoline is made up from two fuels: octane (molecules containing 8 carbon atoms) & septane (molecules containing 7 carbon atoms) combined with @4% additives that are mostly detergents. 91 octane is 91% octane, 5% septane, and 4% additives. 87 octane just replaces 4% octane with septane and combusts at a slightly lower temperature, but saves the consumer at least 10% in cost. They contain the same number of carbon atoms per gallon, so the same amount of energy, and the same additives. Other than that, there is NO difference between them. Premium gasoline is used for higher compression engines (for racing, I always used 96 octane). This is to resist pre-detonation of fuels: KNCKOCKING or PINGING. Cars that require higher octane are specified so because they are expected to endure more extreme conditions, thus produce greater heat. But for the majority of drivers, street driving does not produce these conditions and lower octane fuel is fine. If your car specifies 91 octane and you are not driving up steep grades in extremely high temperatures, or you're not racing the car, USE REGULAR, it saves you $10 per tank. With newer cars, this question is really moot. Your computer management system reads the octane and quality of fuel entering the manifold and then makes adjustments in the engine accordingly (retards the spark). Slightly older cars that tell you to use 91, go on to say that using 87 is allowed, but will result in lower performance (computer detuning); not warranty invalidation. I've always recognized that car manufacturers set octane ratings for engines under stress, so the engine will always be protected against pre-detonation. But it used to be that when an engine wasn't under such stress, say when you're driving to work or shopping, use of a lower octane was fine to save money, and you didn't experience any reduction in performance because computers weren't set to automatically adjust the engine for 87. The Moral Of The Story is that ANY newer car can use either octane rating, you'll just suffer a slight drop in performance with 87, but I don't think anyone would notice the difference..... Now for Alcohol: Ethanol and Methanol have been used in car engines for years. Ethanol, yes, the same alcohol used to make Vodka and other liquors, is now used in virtually all pump gas sold in the United States. Regular & Premium gas contains about two to three percent Ethanol and this affects the makeup of the mix. Premium gas, 91 Octane, used to be 91% Octane, 5% Septane, and 4% additives, which are mostly detergents. With the addition of just 2% Ethanol, the mix becomes 91% Octane, 3% Septane, and 2% Ethanol. Ethanol has different burn characteristics than Gasoline: it burns cooler, for one. So the final 91 Octane rating is actually diluted and this produces an equivalent rating of @ 89 Octane. Some producers have upped the Octane content to 92% to 93% to achieve an equivalent of 91. Gasoline marked E10 contains “up to” ten percent Ethanol. Engines running E10 have to be manufactured to process this much alcohol in order for it not to corrode engine internals, and even melt gasket rings. E85 contains “up to” eighty-five percent alcohol and engines need to be made especially for this fuel. These are the Flex-Fuel cars that may run virtually any fuel available. 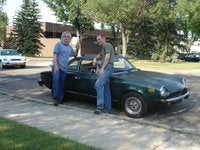 Looking for a Used 124 Spider in your area?