Why won't my car start?

I own a Lincoln ls v8 2003. The battery started to act as if it were dying it first started to die quickly (5-10 minutes) with the key turned but car off, then it went to about 2 minutes until it would die. Then everytime I turned it off and tried to turn it back on it was dead so I had to get jumps. Now it doesn't crank even with a jump. Now its jumped by another vehicle when I try to diagnose the issue. Fuse #1 (starter relay coil) was blown so I replaced it and it started to work again (battery didn't die either) for about 2 days until the issue came back. Now the fuse keeps blowing everytime I try to crank car. It only blows when I crank not when I turn it to on with engine off. The main starter relay is good, I changed the starter and cleaned battery terminals but problem still continues. I've disconnected the gear selector switch and when I cranked it the fuse did not blow. Once in a while when I turn to crank it it sounds like it wants to crank but noise stops after a second. I believe its a short but I'm unsure. I've wasted about 20 fuses and want this fixed anyone know what it would be?

It sounds like you shorted something out, probly have to trace the wiring till you find the short.

Michael how should I go along of doing so? From where do I start?

Follow the wiring from the fuse / fuse block. I would also recommend a wiring guide and possibly checking the Lincoln forum to see if anyone else has had this issue. I'm thinking you shorted it by all the jump starts and blown fuses.I had a similar issue with a miata where the main fuse shorted and burned up the bottom of the fuse block which looked fine on the top side but once it was removed the whole bottom was burned up.

My Lincoln ls 2000 just stop turning on I mean it turns but doesn't start....

I have same problem on 03 Lincoln got it check out but a few peopl came down to them saying I have a bad cumputer idk this was at a five star transmission place I have it under warranty do to rebuilding transmission so idk I have had a lot of problems with this car I’ve had I for a couple years. I’ve done most of the cars replacement and man you can’t find anything on this car. I’m going to try unplugging the gear selecter cuz it had came up on the dash before so may it that’s but like I said the transmission is a real good place and the analysis was a bad computer but then again there only specialize in transmissions place is called Ralphs transmission 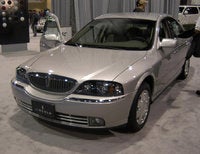 Looking for a Used LS in your area?