I have 2002 Convertible Ford mustang which one
side of turn signal stop working simultaneously. I
replaced the multi function switch or better know
as combination switch. During the process I found
a15amp fuse burn out which one was replaced but
while I attempt to released Hardness from multi
function switch 3 of the parallel top wires came
loose Which colors are (light blue), (white-Red) and
( Green-White)  by looking 90s diagrams I relocated
those 3 wires but now head lights,
wipers,windshields water pumping, high beams,
right turn signal works but NOT the left side during
Hazard light application 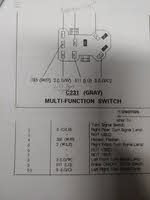 If someone can help in this issue please let me know the Hardness in this 2002 was change due to the trouble sitting it was cripy and fasteners broke up then 3 wires come out it was change but during application of Hazzard flashing lights only the right work as well the right turn signal but not the left light indicator panel for left turn or left hazard indicators.