Was their ever,a 1976 Cutlass Salon,Hurst package build? If so; how many were build?

I came across a 1976 cutlass salon. It has an emblem of different countries flags under the cutlass salon emblem and under that emblem is a Hurst/Olds emblem. The emblems are located on the both front fenders before the door. It also has the same emblem on the trunk lid. Inside the driver side door,is a sticker saying the vehicle was altered by Hurst. It even gives the date and year of when it was altered. The vin # confirms,that it is a 1976 with a 455 and is a cutlass salon. But nothing about Hurst.

vicentj answered about a year ago

I had a similar car, I believe it was called "the international edition" ??? but no Hurst, just the 455 CID engine, anybody know how many were made ?

THEY MADE 2 BUT IT NEVER WENT INTO PRODUCTION 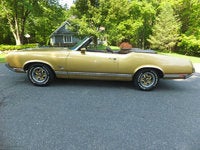 Looking for a Used Cutlass in your area?