My 2002 Buick Century won't start.  When I try to start it, it just clicks and the
dashboard lights flicker, the gauges bounce around, the tape player keeps ejecting the
tape and pulling it back in, and after a few attempts there is a ticking, creaking noise
coming from under that dashboard that may last for 1:30-2 minutes even after the key
has been turned back off. Also, the remote no longer locks/unlocks it.  I jumped it
today and it started, and I drove around it for about 40 minutes. Then when I got home
I turned it off and tried to start it again, and it wouldn't start again and began having the
same problems. Anyone have any idea what could be wrong?

charge your battery up all the way and take and have it load tested. also have the alternator tested. these are cheap/free tests, but the battery does have to be charged up all the way. if you don't have a charger, driving it for 45 minutes or so should do the trick. go to autozone or other major autoparts store and they will usually do these tests free.

Sounds like the altinator, you charged drove it then it wouldn't start that tells me altinator isn't charging but like Mike said the tests are free most times good to know for sure.

Go get you a new battery,if you drove car for 40 minute,s,alternator is good.

I just got the alternator replaced last spring :( a friend of mine thinks its a grounding problem...any thoughts on that?

Check battery post to be tite and no corrosion,all so check the cable wire,s them self,may be bad inside of them,causing the issue you have.

Yes, and to add to what tst said, make sure the ground is good on both ends. Bad ground usually results in no power at all, but a dirty or loose ground can cause intermittent problems like you are experiencing. 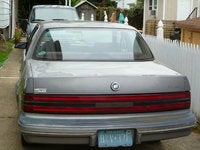 Looking for a Used Century in your area?

CarGurus has 10 nationwide Century listings and the tools to find you a great deal.