Replaced my clutch, flywheel, master and slave cylinders in my 04 Pontiac
Sunfire. Had issues with car not going into reverse after reinstalling all parts,
instead going into 4th. At this point, car would go into 1st through 5th gear
just fine. Took to one GM dealership, they told me that it might be the shifter
inside the vehicle since there was what they called excessive play. They
thought it might be slipping out of reverse and into fifth. Ordered that part
and replace. Haven't replaced shifter linkages though. Problems continued.
Took into another GM dealership, and they told me I was missing a bushing
on the shift tower (I believe it's called, the part the shift linkages connect to
that goes into the transmission. Managed to find the plastic bushing in my
driveway. Pulled out the shift tower, replaced the bushing. Reinstalled shift
bushing. Car currently will shift into reverse and 5th gear. Will not shift into
1st-4th gear. Can move the shifter into each position (1st-4th) without clutch)
and car acts like in neutral. Help please? Did I install the shift tower
incorrectly or is my transmission fucked? Sick of throwing money into a
vehicle that doesn't want to run. 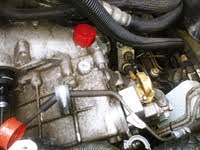 I can sense your frustration with this and short of searching for and finding a missing internal part, I would suggest that you take it to a qualified transmission mechanic. Explain what you have done and let him diagnose and repair from there. Dealers sometimes take the approach that leads to transmission replacement. It sounds like you just need some expertise to determine what is causing this and fix it. Good luck.