Hey guys so I am needing help getting
really annoyed with my car, it blew a head
gasket a few months back so we had to
get it rebuilt, ever since then we have been
having problems it had a lot of trouble
starting and ran real rough put out food on
the accelerator and it hadn't no guts then it
would pick up and blow smoke out the
exhaust, so we replaced the fuel pump fuel
filter cam and crank sensor and the starter
motor it finally started drove it for 2
minutes and turned it off a few hours later
we tried to start it and it won't start so I
pulled out the cam sensor and there was a
dot of coolant and oil leaking out from
where it clicks in so we checked the oil and
it smells like fuel and is a milky colour but
apparently that is normal from it getting
flooded to trying to start it ?does anyone
know what it might be ?2003 Nissan x trail 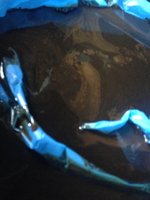 beatupchevy answered about a year ago

they did a half a$$ job and now you have a blown head gasket , that's what I think