Should I turn my 2001 Hyundai elantra into a "sleeper" car

I was wondering about other people's opinions on
turning my 2001 Hyundai elantra gls into a sleeper
car. I got it for free, and just put in a new
transmission, so why not go all out? I'm thinking of
doing an engine swap, installing new exhaust, and
getting new suspension 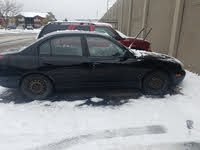 you ass that’s the point of a sleeper. if it was worth upgrading, more people would put in the effort and it wouldn’t be much of a sleeper.

There are no engines you can "bolt in" that will make your car any faster. Spend $100 grand to shoehorn a SBC into it. Now that would be a sleeper.

I have a question about this as well. I've discovered while working on my 03 elantra that it is equipped with a transfer case and that it can be, though most people choose not to, converted to an awd. That being said, I've noticed awd and 4wd are just 2 different names for nearly the same thing. So if it's "technically" capable of being 4wd ALL the time, rather than just offroad, then shouldn't it be able to effectively push a bigger engine, maybe even better than a 4wd? And on the note of handling, my car actually handles pretty well. I believe handling truly has more to do with the drivers capabilities than their car. Just look at mustangs. They're blamed constantly as being cruddy in the way of handling and stability. But most people in the car community have one and control them fairly well, compared to that reckless teenage boy that tries to show off and ends up in a ditch somewhere as a result. Mustangs have excellent handling, for those who know their vehicle. The issue with that is actually, in my unprofessional opinion, that most people don't know them like they should. They never pushed its limits. Never were able to get a feel for controlling it at higher speeds. The weight of the car only matters if you don't know how to control it. If you do, it can actually help you tremendously. You may look at Semi drivers as another example. Some can save their entire trailer and truck from tipping by knowing how to tilt the wheel as they begin to tip. Newer drivers tend not to. It's really all the same concept. Just know your vehicle.

Looking for a Used Elantra in your area?