My 2009 kia rio stalled on me while i was driving it. Tried to crank it but got nowhere, i have power for lights and the fuses are still good. Any suggestions or ideas?

Try the Crank Angle Sensor. Mate of mine had the same problem with his 2008 model.

Where would the crank angle sensor be located? 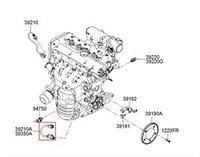 It is marked in the red box

I think it is inside the timing belt cover.

I had the same problem with my 2009 Kia Rio SX Until one day it wouldn't start at all. Turns out it WAS the fuel pump. when you get in the car and turn the key to the run position (but don't start it), you should hear a slight hum for 2 or 3 seconds. That's the fuel pump building up pressure for the start. I noticed an absence of that sound. Replaced the fuel pump myself for about $200. and it was super easy. Kia kept this in mind when they built the car, so all you have to do is remove a 12mm bolt thats between the 2 seatbelt latches on the passenger side (keeps the back of seat mounted) and then there are 2 latches on the bottom of the front of the seat that just left out. There is a plastic cover over the pump that just prys off (it has sticky stuff on the buttom). then there are 2 fuel lines to undo. Squeeze the sides together (colored plastic part) and pull apart. make sure the car has sat for like 30 minutes so theres no fuel pressure in the line otherwise gas sprays out. The electrical connector has a squeeze lock on side. then just lifts straight up (looks like like it might flip open, but it doesn't). Then there are eight 10mm bolts that hold the fuel pump mount on. Take those off, and remove cover. Now the fuel pump lifts right out. Make sure the fuel lines are moved aside so you don't break/crack the plastic fuel line. you might have to rotate the pump a little at the halfway mark to get the fuel gauge float out. Installation is reverse. One thing to note is that the pump has 2 indents on the top that the mounting ring "locks" into when installed. just make sure those are lined up. Also make sure all the hoses are connected before testing anything otherwise gas will go everywhere. Had this job done in less than 30 minutes (not including the 45 minutes spent trying to find a 10mm socket). Car was still under warranty but just bought the pump myself as it wasn't worth Kia taking 2 weeks to try and "figure" out what the problem was while I had no car, and then maybe replacing it under warranty or not. Hope this helps

Looking for a Used Rio in your area?