The A/C only works when I'm driving at least 40 mph. The pressures are good and it doesn't need any refrigerant added. I checked the relays and the fuses in the fuse box, all are good. But the neither the Condenser Fan on the Driver-side or the Radiator Fan on the Passenger-side are coming on. I believe they both should be coming on with the A/C on high and Recirc on. I ran the engine for about 20 minutes, but the Radiator Fan doesn't seem to be coming on when the engine gets warm either. I disconnected the Radiator Fan switch at the bottom of the radiator and tried to jumper the terminals to see if the fans would come on, but it didn't work. It doesn't seem likely that both fan motors would be out at the same time. If I can get my big hands in there, I'm going to run a jumper from the battery terminal to each one, just to be sure they still work. I've read somewhere that it could be a ground got disconnected, but I can't locate it.

Has anyone else experienced anything similar to this? Does anyone have a wiring diagram for the A/C electrical circuit?

I'd check the blower motor resistors---only 2 of 4 selections still work on my 93 Toyota pickup---did you try various speeds? -or- none speed indicating a blown fuse or stuck relay?

could it be a defective BCM (body control module)? see we're in the land of modules these days...ones that you cannot fix, but have to replace...no doubt you've cleaned the black 1/0 wire to the chassis connection?...this is an important one....I'd do that before looking 'pon your BCM...but will look into your schematic if you need some more help with your modules~

...cannot find the schematic...not for public...gotta buy a book to see it~ Saw only wisps of mention of the BCM...will investigate what this device is supposed to be doing that it isn't~

ICU integrated control unit is what keeps comin' up~ gonna have to say this guru is out of gas on your problem...there has to be more to this~

perhaps you've got a schematic in your owner's manual that can indicate where the power to the fans is supposed to be coming from...that's what we need to see, whether or not tucked into one of these modules or independent with relays is really something one cannot say without the electrical schematic~apologies all around...judge_roy

Here's the schematic of the wiring, I think it's for a 2004 TSX but should be close enough.

wow bradgud, I am impressed...there seems to be a transistor added there...is there a story associated with that one?---or that's another buggy? the module---blank box ? is a relay...need to study this some more with regard to your problem...thanks again for gettin' this one~ judge

your relay box has two fuses, and two relays responsible for the motor comin' on...are these fuses blown (in the main box)?

mutual ground G301 for both of these relays...you might check this ground connection, if you can find it~ 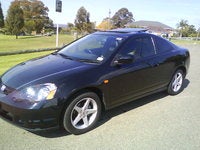 Looking for a Used RSX in your area?