Vehicle just died-2006 Chevy Trailblazer What could be the
issue? Just bought a 2006 Chevy Trailblazer 146k miles on
it the end of May. Was driving it home yesterday the AC fan
stops blowing in the front and the battery light comes on
and the message said “battery not charging”. Then like 10
seconds of that being being on the ABS and brake light
come on and it starts making a beeping sound. Then the
battery,and and brake lights disappear. And then when I am
pulling in to my driveway they all come back on. So then I
shut it off and try to get it started and it starts but then
those lights come back on and then also the “no airbag”
light pops up now too but as soon as I put it in reverse they
shut off. So then I try again and this time it won’t turn over
and a minute later everything electrical stops working. No
lights,no AC,no windows,no seats,no dash…nothing. I am
thinking maybe the battery just needs to be charged so I
hook it up and wait for a little bit etc(this next part might be
wrong I can’t remember) and I start it and it turns over and
starts so I rev th engine a little bit but still no electrical
comes on in the inside no lights no blower no windows no
seat the dash wont light up. Whats the issue with this if
anyone can help I really would appreciate it? Frankly I want
to know if this is going to be a couple hundred or a couple
thousand to fix. The vehicle now will start and run but
nothing electrical works inside. No windows,dash wont
light up,no AC,no power seats etc.

So then decided to try cleaning around the battery(battery
looks good no corrosion etc/rust). So did that and tried to
start the vehicle and the headlights came on yet it wouldn't
start BUT the lights on the dash finally. But since it wouldn't
start I hooked jumper cables to the battery and the vehicle
started fine(the shifter was able to be moved to reverse
etc) so I unhooked the jumper pack but after 5 seconds the
same thing happened the ABS/NO BRAKE light came on
and then all the lights on the dash went out. I go to start the
vehicle and nothing it wont start.

What could be the issue here? I don't suspect it could really
be the battery because would that really make the lights in
the dash not work?
Could it be that blown 125 fuse or the alternator?
I don't see how the alternator either because once the
jumper pack was on the vehicle started and was fine
idling(just the lights)

FJ4072 answered about a year ago

If someone jumped the battery on the wrong terminal, YES, the megafuse (125A) right there will cause your symptoms. A weak battery can also cause your symptoms, I'd have your charging system and battery checked out. Also, clean ground, down to raw metal on passenger side of tranny hump. Pull carpet back, it's 1 screw. That ground handles a lot. How many volts on the battery when it's running? How many volts when not running?

Leah answered about a year ago

Battery wasnt jumped until after these issues were there and it was done correctly as well. I have no idea its at the mechanic right now and how could 1 screw mess everything up. I actually got it started after jumping it and it was fine until I put it in gear then driving it down the rode it dies

I have owned a 2004 and 2002 since 2005. The 2004 I drove from 9k-155k and never took it to a shop during that time. That being said, this really sounds IMHO like a failing ignition switch. This is a common thing in these and can cause gremlins electrically in many systems. I have replaced it on both rigs and the 2002 I purchased at 66k(senior find) a couple years ago and is now at 101. The switch went bad in the 04 around 125k. Anyway, hope that helps. It is about a $15 part on ebay and it only took about 20 minutes to change it. Just make sure to be careful with pulling on wiring while you are doing it etc. Good luck to you.

My 2003 trialblazer 4.2 when I jump it it take a while to start up then let it run for 10 min and turn off engine . Try to start again it wouldn't start and jumped again and I drove around the block now the truck doesn't have any power to speed up it felt like it was going to die on me 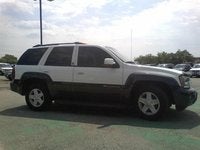 Looking for a Used Trailblazer in your area?