I have a 1986 dodge daytona turbo..when I crank it up it won't sit and idle.when u give it gas it will sit and rev itself up and down.that's when its almost to the floor..any ideas on what's goin on?

I'm stumped..noone seems to be able to tell me what's goin
on with it..even the garages..they get pissed and tell me to
come get it..its drivin me crazy.

Though I am not a mechanic, what you describe suggests to me that the it might be worth finding some way to check the modules controlling fuel. A quote from this website: http://www.allpar.com/mopar/22t.html "In 1986, fuel injection systems were controlled by a pair of computers, the Logic Module and Power Module; the logic module controlled ignition timing, the air/fuel ratio, emissions control devices, and idle speed, while the power module translated the logic module's demands for air/fuel ratios and timing into signals sent to the fuel injector (altering the length of its pulse) and the distributor."

Honestly it can be a few things, can I ask at what RPM''s does it reach before it down throttles? As the owner of 6 Daytona shelby's, I seen this happen due to the mass airflow sensor or even the coil not being strong enough. 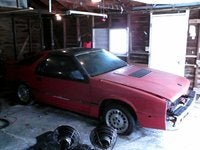 Looking for a Used Daytona in your area?