HAVE A 1982 FORD EXP IN GOOD CONDITION, WITH ORIGINAL PAINT AND INTERIOR.  NEVER BEEN WRECKED.  1.6 COUPE WITH AIR CONDITIONER.  WOULD LIKE TO KNOW A VALUE.  NOT INTERESTED IN SELLING BUT CURIOUS OF VALUE.  PLEASE RESPONS TO HALESCONST@AOL.COM.  THANK YOU!!

I call BS on last reply,this car was junk from the start.

There is a NADA site you can look at. I bought my 1982 EXP in 1987 for $700.00 - I was 16yrs old and it was my first car! It was white. Put a lot of work in it, repainted it with an Opal/White paint job, Pioneer cassette player (LOL), speakers, those white BLADE windshield wipers, new wheels, and decked out the interior. It was awesome for a first car.... I try to tell my 16yr old about it and she is like WHAT?? no back seat??? Too Funny... Wish I had a picture of it. Good Luck finding a value for it. It was one of the first 2 seaters to be brought back in 25 years. It was previously a Mercury MX7 or something like that. :)

I was a teen/ HS aged driver, 1st car I bought myself.. in NC... LOVED this car... absolutely zero problems everl... you say it was junk I say, you in my case are WRONG!

Owned an 83 and 84 EXP. Everywhere I went people always had fond memories of either owning one or knowing someone that did. Got outrageous gas mileage and never left me on the side of the road. 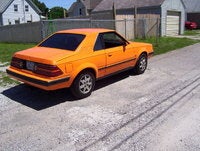 Absolutely BEST car I ever had was a 1984 EXP, bought new in '83 and when it was "stolen" it had 140,000 on it, was 23 years old and had almost all original parts. New muffler twice, regular tune-ups, tires and a water pump. That was IT. Five speed and I taught 5 teenagers to drive in that car. My teenaged son drove it to school 7 months and never had a problem with the car. Sure wish I still had it. bb

I have an 1982 ford exp for sale any interest my email williammamo1971@gmail.com great condition

I recently stumbled onto a barn find. 1982 ford exp, I had it a few years before I did much looking on them. My question is, how rare are they to be found orginal. Orange inside and out? The only orange exp I have found is the original TV commercial on Youtube. I know I don't have that car cause it has a black band around its lower. My car is straight orange. Any information would be very appreciated.

GuruVM91B answered about a year ago

I owned a 1982 EXP , car was junk I bought it in 83 , my wish would be to have kept up the 72 Chevelle I had instead , the Ford had major issues with head gaskets and heads in general ,it had issues from the cheap build quality , the electrics were problematic, the automatic trans literally broke into several pieces at one point , we bought a manual and the pedals and swapped out due to no parts by then to be found , I did have a lot of fun in it and when it was rear ended it was a good thing , no more problems I think that wa about 1988 . Be a great platform to build a drag car , I saw one back then was pretty cool .

Robert answered about a year ago

@Tangerineexp I had that identical car in the 1980's, it was all orange, had black interior and orange and black trim inside. I'd be interested in yours.

GuruLFW1H answered about a year ago

Im interested in buying one if someone can point me in that direction bcjones39@aol.com

bcjones39@aol.com Any luck in buying a 1982 exp? If so and u know where I could find one and looking seriously I had a brand new 82 Ford exp I bought brand new in January of 1983 from a owner of a dealership who had it at home in his garage and I talked him into selling it I looked high and low and then for 1. Mine was was silver with black and red trim,and red leather interior I'm still kicking myself for selling it. Any leads give me a call 605-888-6323. I hope you found what you were looking for

Looking for a Used EXP in your area?