The Pontiac Catalina is an automobile which was part of Pontiac's full-sized line from 1950 to 1981. Initially, the name was used strictly to denote hardtop body styles, first appearing in the 1950 Chieftain Eight and DeLuxe Eight lines. In 1959, the Catalina became a separate model, as the "entry-level" full-size Pontiac

You can use parts from these 3 models as interchangeable: Chevrolet Biscayne Oldsmobile 88 Buick LeSabre

For 1960, Catalina and other Pontiacs received a minor facelifting of the '59 bodyshell with a new full-width horizontal bar grille similar to the 1930s Cord replacing 1959's split grille (for this year only-the split grille returned in 1961) and round taillights. Bodystyles and drivetrain offerings were unchanged from 1959. New to the option list was a "Sportable Transistor" radio that could be used in the car in place of the regular "in-dash" radio or removed from the car for use as a portable with battery power. Also new for 1960 were the optional "eight lug" aluminum wheels with integral brake drums that not only enhanced the car's looks but also provided improved stopping power. Another popular option for performance enthusiasts was the "Safe-T-Track" limited slip differential. In the suspension department the front track was increased from the 59's 63⅞" to 64". In the engine compartment the gusher type (water injection over the exhaust valves- reverse flow type) cooling system was replaced by the equa flow type (conventional V-8 cooling). Turn Signals were standard, while the A/C was $430 and padded dash was $19

I need a radiator, door panels.

I use Hemmings.com for my antique car parts

Buy the radiator new. The door panels can probably be bought from a vintage car parts dealer. You can't change door panels between models of car and especially not between GM brands.

Ok, any suggestions for new radiator?

Hemmings produces a catalog....and it is also on line

Another option is locating the Canadian built models or the same car. They carried different names like "Parissiane" for the Catalina I believe. 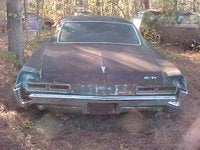 Looking for a Used Catalina in your area?