I have a 2006 Saturn Vue. The dash lights and tail
lights aren't working. Can someone please tell me
where the fuse is.

Thank you so much. Is that the fuse box located on passenger side to the side under the dash? I just bought the car a couple of days ago and I don't what fuse goes to what because the front panel is gone

I did download and read where where u said said chapter 5 page 94 and 95 and it did say under the diagram that is where it is located. Thank you so much for your help. You have been so wonderful!

Ummm...not sure. But what I do know it's not under hood, it's inside cabin. But if you have the manual it will show that, or download from link. click on this

Thank you so much for your help. Unfortunately it wasn't any of the fuses or the relay. Maybe it's the headlight switch itself.

That would be next. Best wishes on this. Do not hesitate to come back with any more questions. ~~David

I have a 2004 I've had the same dash/tail light problem. I switch out the fuse and it keep blowing, any suggestions?

I have a 2008 Chevy HHR, which shares the same engine as this Saturn...as a matter of fact, I had to overhaul my engine last November and got a used one from a Saturn Vue. Since the replacement I've been having the same problem, probably gone through 25 fuses. I'd just be driving along, the lower dash lights would flash a little brighter and then go out (and I'd know the tail lights went out). I've read through countless forums to see if anyone knew how to alleviate the problem and kept running into the same basic solutions which never work. Earlier I came across this from an "eric fragola": "...magically, when it stopped happening, my daytime running lights stopped working. Turns out it was the Daytime Running Light relay. The relay deals with the tail light circuit, and when the relay would internally fault, it would cause too much power to go to my lights and cause the fuse to blow. I replaced the relay, now my daytime running lights works and haven't had any problems since. Took me about 6 months to figure out, and has been good for about a year now, figured id share my fix with everyone else".

GuruKJKQB answered about a month ago 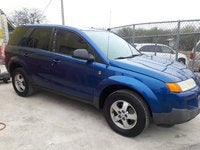 Looking for a Used VUE in your area?