White smoke from exhaust on a 2003 Altima?

I recently purchased a 2003 Nissan Altima 2.5L and have been having trouble
with white (or possibly blue) smoke coming from the exhaust. It used to be
very frequent, but then I discovered that there was a hole in my crankcase
ventilation hose, so I replaced that along with my PCV valve, and now the
vehicle only smokes on cold startups. Also, it will only produce smoke if the
car was driven recently, so for instance, I started the car and idled it for about
45 minutes with no issues, let it cool and started it up again, no smoke. But
even after a 10 minute drive, the car will smoke on next startup until it reaches
standard operating temp. It's also worth mentioning that the previous owner
replaced the valve cover and gasket. Other than the smoke, the car runs and
idles fine, no check engine light, no overheating, no power loss, etc. I appear
to be losing a small amount of oil, and maybe a small amount of coolant but
thats hard to tell. The fluids appear to be normally colored. The only leaking I
find under my car is water occasionally, which I assume is just the AC. 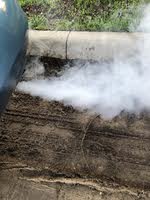 How many miles on the engine? Sounds like bad valve seals. When you turn off the engine, oil leaks through the valve seals creating the blue smoke. White smoke is usually caused by coolant leaking into the cylinders but you said no overheating or loss of coolant. As long as it is running OK, you are probably fine for a while. As it gets worse, you may see fouled spark plugs.

Almost 194k miles. If I were to notice a coolant leak in the future, where should I look? The head gasket?