My family and I were on a 2,200-mile road trip.  We pulled off the interstate to
refuel.  Like many stops previously I had popped opened the fuel door
uneventfully.  This particular stop the fuel door would not open.  the owners
manual did not offer any real advice.  I called Volvo help from the car - they
told me to make sure the car was off, windows were fully up, the vehicle was
empty and all doors shut.  Once those items were complete to take the key fob
and hit lock, then unlock three times in that order then try to open the door.  I
tried this repeatedly to no avail.  I called Volvo back and they said they could
send a tow truck - seriously?
It was late and I needed to get to our hotel and we were tired - I was going to
rip the door off it that is what was required but fuel was going into that tank...
***THE FIX***  I went to the town auto parts store and asked the older
gentleman if he had heard of such an issue - which he said he had not.  I
decided to pry the door open.  I borrowed a screwdriver from the store and
placed a cloth next to the paint so not to damage the door or body of the car.
I placed the blade (as you're facing the door on the left) opposite the hinge.
With minimal pressure, I pried it open and it popped open.  I gently closed the
door to see what happened and tried to open it again - no issue and I have not
had an issue since.  I read some comments about temperature and waiting,
maybe that works for some - I suspect at my previous gas stop I might have
closed the door too hard.  Hope this helps! 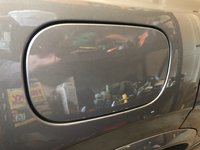 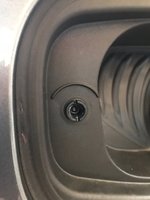 Door pin that was stuck. 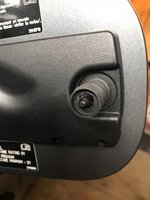 GuruVX7ZK answered about a year ago

I'm assuming you had the key with you. The key needs to be within 5 feet for the fuel door to open.

NC2020 answered about a year ago

This situation happened to me and it turns out I was using the valet key fob. My wife drove to the gas station with the primary key fob and without exiting her vehicle selected lock then unlock on the primary fob. Upon doing that I was able to open the fuel door as designed without incident. That was the first and only time I was unable to open the fuel door while using the valet key fob.

Turns out my fob battery was low. Removed the battery and put it back. The lock and three unlocked then worked.

jamesc3000 answered about a week ago

THANKS A ZILLION! Saved my backside!!!

jamesc3000 answered about a week ago

Thanks a ZILLION! Saved my backside!

Looking for a Used XC90 in your area?