Robert F. answered about a year ago

Ed is wrong unless he was there on the assembly line. LX is 100% right. Only exception would be if your Vin had no letters, but it obviously does. GM Canada still has those records for every car they made.

My intention was to write, "Not a verified SS," because 95% of those you find are fakes. For the "72 model year, VIN alone contains no proof of SS, other than the 454, which had the "W" code and is found in only the SS. Without other documentation, this could be a Malibu or an SS. Even Chevrolet probably has no further documentation than the VIN..... Some people refer to a "build sheet," which we used to call, "Production sheets." These sheets, sometimes found under the rear seat or under the rear carpet, were never intended to remain with the car, but were supposed to be gathered at the end of the line and filed in Chevrolet's records under the VIN (long lost when paper went microfiche). That's the only way Chevy would know if a particular car had the SS option added, as sales document were kept by the dealer only (also long lost). Today, we probably can never be certain about the lineage of the 350 or the 396/402 Chevelle's. 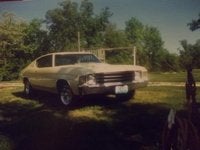 Looking for a Used Chevelle in your area?

CarGurus has 6 nationwide Chevelle listings and the tools to find you a great deal.