My lift gate would not open. I searched the web including
YouTube for answers ... NONE were found!  I read the
manual couldn't find the answer ... Liftgate would lock
and unlock but would not open.... I figured  out that inside
this little box is a white plastic thingy ....  I stuck a
screwdriver into it.... turned it  .... I heard it click ...  tried to
open the liftgate and it opened ....   I opened and closed it
a few more times and it worked perfectly !!! Yay! 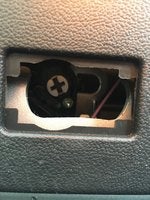 Here is were the little box is located- 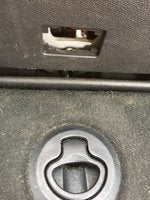 Which way to turn it...Don't want to break that plastic tab..?

Ok so I don't mean to be dumb, but what do I do? My hatch won't open either and I have a 2009 Dodge Journey. So I see from the picture above that you find a little box that looks to be on the back seat. What do you do once you locate the box?

The access panel in on the rear hatch itself, not the back seat. You need to crawl through the back seat to reach it. Pop open the cover with a screwdriver and locate the large white Phillips head inside (refer to the great photo above). Be careful as there is a smaller black Phillips head right below the white one. Turn the white one about a quarter turn until you hear the hatch unlock. It doesn't take much to turn it. I believe clockwise unlocks the hatch and ccw will lock it.

RamonF16 answered about a year ago

Worked like a champ! Thanks for the tip saved me a trip to the dealer and paying $95 for a guy to climb in and do what I did in 15 seconds!

GuruTK7DV answered about a year ago

I agree. Worked perfectly once I discovered the small cover under the light. Thank you!

Rolly answered about a year ago

My lift gate would not open. I searched the web including YouTube for answers ... NONE were found! I read the manual couldn't find the answer ... Liftgate would lock and unlock but would not open.... I figured out that inside this little box is a white plastic thingy .... I stuck a screwdriver into it.... turned it still not working...its a dodge 2014 journey american

Trâm answered about a year ago

Got the same problem with Dodge Journey 2014 too. Can’t do this way.

Rolly answered about a year ago

i did....just push my switch control on my hand and its miraculous its open my liftgate...i will say just make push or tsek ur fuse ,,,see that in google hoe to do it ok

Trâm answered about a year ago

My dodge journey 2014 had the same problem. I tried with screw driver without luck. I opened the light above the little hole and i can see locker through that bigger hole. I tried to pull the cable couple times then straight the cable then pull the cable again. Liftgate waa open. I opened the boot panel and found out somehow cable was bent/partial broken and it did not release cable when we press unlock button on remote. Because i live in Australia, it is hard to find dodge parts. I went to warehouse and buy similar cable and modified to replace the original one. It works now. 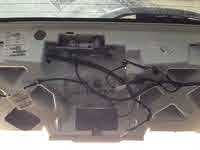 GuruLT2TG answered about a year ago

The problem is more than likely the wire harness running between the door and body of the vehicle. These vehicles are known for these wires drying out and breaking.

GuruLT2TG answered about a year ago

This will unlock the door but not fix the problem. Check wiring harness between door and body once door is open.

YES!!! --- I also just fixed it in a few minutes! Thanks for posting this fix!

Looking for a Used Journey in your area?