Steering wheel is locked.I tried key-jiggled it & wat
I usually to but nothing

Most Saturns have this problem they seem to lock up on you my cousin just leaves it in the unlocked position when he parks. Only thing you can really do is grab the wheel really hard and jerking it around several times and then keep using the key too. The only other thing than replacing the key lock I don't think the key lock is the issue it's actually an assembly that locks it to the column that needs replaced.

No. The only thing correct about the above answer is that you can try to move the wheel (with force) and attempt to turn the key at the same time. There is no "lock" and "unlock " positions as I have owned and worked on dozens of S Series, there is also no "lock" assembly regarding the column? What is he talking about "The only other thing than replacing the key lock I don't think the key lock is the issue it's actually an assembly that locks it to the column that needs replaced."??????? He doesn't know what he's talking about. It is called steering lock and with the S Series, and almost every car out there, if the wheel is turned a just the wrong angle after the car has been turned off, you have "jiggle" the wheel while trying to turn the key to start it (or getting the key to turn to ACC or ON. You also can use the "Shift Lock" release on the tranny if its an automatic (shift it to Neutral but ensure the parking brake is on) and this will allow movement of the wheel. Disregard the above post... if you look at a diagram of a steering column on the Saturn S Series, there is no such device he is referring to nor, is this a "known issue" with Saturns. This is simply a case of someone with access to the internet thinking they know what they are talking about.

The one thing I can say about six-foot"s answer is if you can actually release the transmission shift lock to free up the steering wheel if that's even possible " different models different set- ups excetera different years" that's a great thing to do. The reason I think it's a general Saturn problem is with the 2 Saturn's "SC2 coupe's" my cousin did have the same lock problem but yes 6 foot might be correct it might be just that he was unlucky to get a couple cars that were kind of funky that way. My cousin went as far as to have the actual key lock cylinder replaced on one of his Saturn's and it did nothing to repair the problem with the wheel not unlocking when he put the key in the ignition to try starting the car. My cousin had went to a dealership and they brought up the diagram of a steering wheel lock assembly for his car. The dealership said if it's not your key lock then its your whole bracketed column meaning where the wheel turns 360 on the shaft " steering column" it has a pin lock that comes through and locks it to the bracket that holds the steering wheel as far as I understood what he told me. You can tell when you're moving the wheel that it locks in position " when the keys out" it's an anti-theft device so I know it exists I don't know what six foot is talking about because all cars have this anti-theft device. I say this with the knowledge of witnessing at the repair shop for my cousins Saturn 6 months ago the work that was done, they took the key lock cylinder out put a new key lock cylinder in and it still didn't solve this problem with the wheel almost always becoming a real problem to get it unlocked so you could drive away. I believe the dealership is correct in what they told him that it's an assembly bracket column "sorry don't know the exact terminology for the part" that the steering wheel goes on that needs replaced so like I say it probably is the whole thing that holds the steering wheel it's like a whole bracket assembly unfortunately it's the part that the wheel goes on too and it's like a frame column thing that you have to buy as an assembly or even get from junkyard, but if you can do the transmission thing and put it in neutral and be able to move the wheel but I think you first have to get the key to activate the ignition before you can actually activate it to shift into gears let us know what you come up with I'm curious maybe you can prove us both wrong I don't know and by the way this is just free advice I'm not trying to attack 6-foot and I hope he's not trying to attack me?

readytosell414 answered about a year ago

Could any of this be caused by the steering box? Where is that located? I'm leaking fluid from the boot at the end of the tie rod. Does this mean the rack and pinion needs to be replaced?

How to unlock the steering column without key ,my my kids lost the key and locked the ignition trying to start it with a screwdriver lol . Not really funny I have four kids I'm a single mother he needs to go to work everyday and I need to go to the grocery store I have two vehicles here but the Saturn key got lost and on the truck I had a neighbor help me try to fix it and they over tightened one of the bolts and broke the solenoid 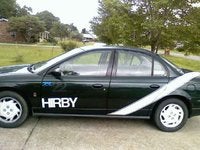 Looking for a Used S-Series in your area?

CarGurus has 4 nationwide S-Series listings and the tools to find you a great deal.