I have a 2004 Ford Explorer sport trac

Might want to check your o2 sensors, if your truck is running to lean it can produce symptoms similar to this. Also the crank shaft sensor... Hope this might help you out.

Wow, glad it worked out for the better for you then :) @alex 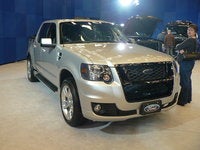 Looking for a Used Explorer Sport Trac in your area?