My 2002 Grand Prix center brake light works, but side brake lights don't. Tail lights,
backup, and turning signals all work.  I tested wires and no power at side brake light
receptacles when brake pressed, fuse is good (I only found one fuse for Stop lights in
fuse panel behind glove box), brake light switch good (there are two switches under
there so I've only replaced lower larger one - expensive).  Don't know what the higher
one is for with only two wires to it. Power at fuse tested good. I'm going to check the
steering column flasher issue discussed in another post next but I'm running out of
options. Can't believe a wire would just short - but maybe where they converge there is
a bad connection. I know in the trunk that 4 or 5 brown wires are connected to one. It
looks like my wire loom runs up the passenger side floorboard under the door kick
covers. Does anyone know - there are green black and brown wires to the tail lights -
which two operate brake lights? When I turn turn signals on and test green and black
and green and brown, both blink my test light.  Which two colors operate brake lights?
tested across green and brown wires I found along passenger door kick and no power
there either.

Are you SURE that the brake light bulb(s) filaments are good?

2002, GP GT 40th anniversary edition. I found mine was the emergency flasher button/switch on top of the steering column. Tore it apart because it was stuck. pulled it up n out, found the bottom triangle contact had partially melted the square housing. Chipped away at it until it moved enough so the brake lights work, but the switch is shot and gave me a SES light on the dash. Replacing is fairly straightforward, just need an E-Torx bit to remove the two screws that hold the top plastic piece of the column, then normal tools. And dielectric grease to keep moisture out of there in the future.

GuruV6G4L answered about a year ago

My brake light on the passenger side work but not on the driver side. I've changed the bulb & checked the fuse & still nothing. Do anybody know what it could be? 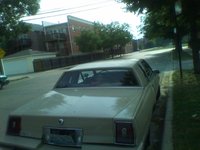 Looking for a Used Grand Prix in your area?

CarGurus has 20 nationwide Grand Prix listings and the tools to find you a great deal.