2001 Pontiac grand am won't turn over

Hello there my car ran just fine yesterday an I go to
get in my car today an I try to start my car and it
won't start. It cranks but won't turn over.  My
securtiy light comes on but does not flash. My fuel
pump is still good because I can here it when I turn
the key to on. Does anyone have a solution for me

Just because you hear the pump come on when you turn the key on does not mean pump is working. If something inturnal has gone bad inside pump it will sound like its working but is not. To test spray some starting fluid or throttle body cleaner into throttle if vehicle starts then shuts back off you have a bad fuel pump but if it does not start at all you have a no spark problem.

THANK YOU.... MY HUSBAND WAS JUST STUCK AND I CALLED HIM AFTER FINDING THIS.... WORKED! 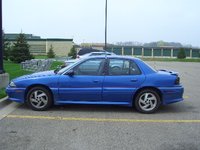 Looking for a Used Grand Am in your area?

CarGurus has 11 nationwide Grand Am listings and the tools to find you a great deal.