how much does car guru really know about the cars you are advertising? Two eeks ago I bout an lexus gx 370 from Hoffman auto group in Sacramento. within the next day it we took it to a machanic and

because the breaks were bad and had to be replaced.  The car was also shaking like an earthquake and the mechanic we were told to take it to their mechanic who told us that the suspension was bad and will cost us about $1,500 or he could do a conversion for five hundred,  He then refused to work with us because Hoffman was not going to pay for it,  We towed it to TOS repair shop and it cost us $1,400.  and were told that it needed more sensors that would cost another $1,300, I called  Hoffman but they would not talk to me at the time and promised to call me back,.  That was this las Tuesday.  Today is Friday and still no call back.  The point is this care was way over priced, considering the condition it in.  If you company just does paper evaluation it is kind of misleading to consumers who think that they are getting a good deal contrary to the truth  What can you or I do about this?  I inow it says AS IS but not as it is not running and unsafe.

This is a perfect example of why to get a vehicle checked out by a 3rd party before buying it. I wonder if you even test drove it. CarGurus only lists cars for sale. CarGurus does not have any idea as to condition of those vehicles it lists.

Hoffman and many of the dealers provide expensive advise that is wrong. They wanted to charge to $2000 for a throttle body, when I said and was correct it was a sensor. Towed to local dealer saved $1800. Just had another Lexus look over a GX470 before I purchased. I thought a shock was leaking, but did see pink. Needless to say radiator. So don't trust their opinions. 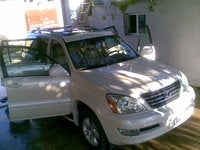