Loud Backfire Like a Bomb Explosion and Engine PCV Damage

Recently My jeep developed random engine misfires that would come and go I suspected that possibly the low cost fuel injectors that I installed last year were the culprits, so I planned to replace them all with Bosch 19 pound 4-hole injector upgraded that I already have bought. However, last week the Jeep Exploded very loud on starting, which I ruled to be a backfire, and it could not start after that the engine starts and keeps revving up even without pressing the gas pedal, and out of concern I just turn it off. Today I checked it closely, and found that there a plastic plate behind the intake manifold that seem to have been crushed by the explosion (see circled part), and therefore it is allowing excessive air into the system causing the engine to rev up uncontrollably. Further examination shows that the PCV valve seems to be dead, because the hose from the plate I indicated in the picture to the PCV valve we knocked off. My two questions are (a) What is the name of that crushed plate so I can search it online, (b) Cold the PCV valve have been the only problem that caused the misfire and backfire or I should still replace the fuel injectors also 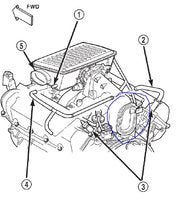 Should I change the whole intake manifold? I can get one from a salvage yard for less than $50 but I hate the hassle of removing it, because I have to remove all belts, the generator and the AC, and then control the tightening.

Thanks Tom; I eventually ordered a replacement intake manifold yesterday, and I will have to go through the hassle of replacing it. I wonder if you can help me guess where these fuel vapors could have came from; I had parked the car outside in the cold (North Dakota Cold) for just about 25 minutes only.

I removed the damaged manifold, and found that indeed as Tom said, there was fuel in that manifold, and plenty of it; my question now is how did that fuel get into the manifold? It seems my assumption of defective fuel injectors is probably not the reason. Can anyone help me figure out how could this happen? There is a new fuel pump and a new fuel pressure regulator (12 months old) both bought from O’Reilly Auto Parts, and were recording 55psi are I reported here https://www.cargurus.com/Cars/Discussion-t15897_ds769137

Just replaced the intake manifold, fuel injectors and the PCV valve and the problem seems to have been solved, at least for now. Engine starts and runs smoothly than before, and there is no too rich mixture warning as before. It seems that some of the injectors where not atomizing fuel properly, which ended up in the crankcase and got sucked through the PCV valve back into the intake valve. My advise is to avoid running engine on too rich mixture because the same costly situation can happen.

Looking for a Used Grand Cherokee in your area?