I have a 99 Monte Carlo. The brake pedal
started to get really stiff and wouldn't go
down when I would drive more than 15
minutes. Plus the car would start to shake , I
would feel resistance when I accelerate, and
I would smell that burning brake smell. So I
had the rear brakes replaced. Three days
later I had the same problem. I had the front
brakes replaced. Three days later same
thing. Got the hoses replaced. Three days
later started doing it again. Got the master
cylinder replaced. Mechanic says that has to
be it, there's nothing left to replace. The car
has been fine for several weeks and now the
brake pedal is getting stiff and the car is
starting to shake when I drive 20 minutes to
half hour, and I feel the resistance. I don't
know what more to do except get rid of the
car! Please help!

The piece the master cylinder is attached to is the Brake Booster. These will go bad and make the brake pedal hard to push, and may cause the brakes to lock up. Sounds like that brake booster needs replacing.

I agree with Rowefast, it could be the brake booster.

Also could be a bad or sticking proportioning valve to test when brakes start the vibrate jack both front wheel up then try to turn by hand if both are locked up most likely valve is sticking or bad.

Thank You! I wonder why it is fine for a while after I get it fixed and then the problem comes back?

get your abs pump bled. air trapped in pump causes that. It wont go away untill you do that. 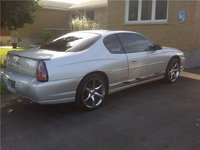 Looking for a Used Monte Carlo in your area?

CarGurus has 2 nationwide Monte Carlo listings and the tools to find you a great deal.