I bought this car from a trust. It was in a collection and sat for 35 years. The seller put new gas tank breaks, radiator on it and I have done a lot of work. I have an electrical issue that is getting me very frustrated. Thanks for any help. My 80 Esprit FB started fine today and I took it to an antique store to shop a bit but mostly take the car for a drive.Stopped for gas and it fired up. After stopping at the store for an hour I went outside and it was dead, very low light coming out of the dome light and dim idiot lights. Buzzer was not strong either. At first there was nothing not light from anything its all dead. I wiggled the front batt connections and they seemed fine. The store clerk called her husband and he came and gave me a jump. I connected the cables and nothing. I wiggled them and nothing but dim bulb no starter. I kept playing with the ignition and it turned over but I was wiggling the key back and forth so I cut it off before it started. Then it was dead again. After playing with it for a bit it kicked over again and started. I drove it home parked it and turned off the key and it was same, dim dome and would not start. Last time this happened I put on a new ignition switch and a new starter and took the battery out and had it checked. Its a Napa and was bought about 12 months ago so it has a warranty on it still. O'Rilley's put it on a tester and did a load test and it came back fine. Not sure what would cause this issue. I keep the battery on a tender when not being driven. I took some time to check the main battery cables. None were loose but one was a bit corroded under the cable that goes from the Neg battery to the eng block. I removed them all and did a grind with dremmel and then put dielectric grease on them. I rechecked and the eng fired up and all lights worked, I am no way sure I have found anything that is the issue. Any ideas would be a great help. Thanks again. 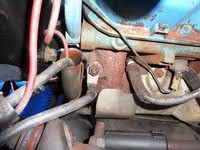 Apparently you found the problem. I would probably install new battery cables. BTW. Dielectric grease should not be used on the contact area as it is an INSULATOR.