why do all imprezas blow up the piston no3... near the turbo? why not give better and higher pressure oil pumps? why not cool the intercooler with a glyco/water hybrid system????

usually it's the no4 piston that goes due to the fact that it's the last piston to get fuel, with how subaru's fuel rails are set up it dosn't get enough fuel causing it to lean out and eventually sieze, the no 3 piston is not something (as far as I know) that is a common problem.

Also higher pressure oil pumps are not always better, after a certain point higher oil pressure will actually start to ware lubricated surfaces (such as bearings) faster, it's actually better to have an oil pump that produces a higher volume of oil run through the system, it's all a balancing act. As far as the intercooler system what are you asking about it, do you mean is it a good idea as an aftermarket part or why dosn't the factory install that as a standard system? In the case of the second, the company does not figure it will be nesessary as they do not expect most people to rod their cars that they just bought new, it would also raise the price so it is left up to you to do something of the sort at a later date.

the reason would be when oil is moved around(say like a track day like i did with mine) it sorta flows to 1 side and causes the bearings to crap themselves, 1 way ive heard to prevent this is when u do a oil change add like another 500 ml in when it reeads full.....from om that it "should " prevent bearigs from going bang.....also i dunno why the 3rd pisto go but i heard thats common... 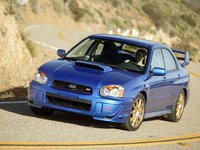 Looking for a Used Impreza WRX STI in your area?