Overheating on my 2015 Bantam XLE

My Bantam 1600 XLE 2005 keeps overheating the past few months. The
heat gauge shows normal but the engine temp on the block near the water
pump rises to 80 deg C and the water temp from the radiator measuring on
the rubber pipe going into the water pump hosing is 75 deg, I replaced the
temp measuring unit and the temp on the engine is still to high. However
when I disconnect the temp measuring unit, the fan comes on immediately
when the car starts, which gradually makes the battery flat since I drive short
distances mostly. Then the engine temp after driving about 10km is still close
to 80 deg and the water filler tank around 70 deg C. What is the "normal'
engine block temperature of a Rocam engine? At what temp should the fan
kick in? When the Radiator outlet pipe temp is around 60 deg I can touch the
water filler tank, open the cap without steam coming out. I recently had to
replace the fan and it looks like it can run at 2 speeds, just a guess, because
it seems there is another relay and resistor mounted at the bottom of the
Radiator Fan. I do not have a manual and drawing of the electrical control.
Can anybody give me advice please?
Cobus

Have you checked the termostat. These sometimes at this age give problems. When the ECT sensor plug is disconnected the cooling fan will run. This is part of the fail safe system. Check also the charging rate of the alternator. The Bantam with the air con system as standard has a two speed fan. Please find links to the workshop Manual and wiring diagrams :https://www.manualslib.com/manual/1106266/Ford-2002-Bantam.html#manual https://elektrotanya.com/ford_bantam_2002_wiring_diagrams.pdf/download.html

Hi Guys, this is awesome, I appreciate your help. I removed the water pipe going into the Water filler tank and the water flow coming out of that pipe was quite weak. I would have expected a strong flow. Even when the water started warming up and the brand new thermostat was obviously opening, it looked a bit better but still quite weak. The fan is at present running full throtle because the PCM is not switching the Fan on when the new sensor is plugged in. But the water temp and the engine block temp rises to 78 deg, after I opened up the plastic male fitting around which the rubber pipe goes on the filler tank body. That was very restricted. So I obviously still have a decent cooling fan control issue. However I am really battling to start the Bantam. You crank it for more than a minute and often until the battery is flat. This is now after the aluminium head was fixed after the head gasket blew. The Camshaft position sensor makes no difference whether it is connected or not. Any ideas?

Does this Bantam have the original Computer Box (PCM) ? It sounds like it could have the PCM off a Fiesta 98 1400 which has a two group injection system instead of a sequensial injection system. (The Fiesta 98 does not have a Camshaft Position Sensor). Is there any oil in the cooling system or water present on the dip stick ?

Hi Guru97FK8, Thank you for answering. I was away from the Computer but is back now. The PCM is the original because I am the first owner. There is no water in the oil now or oil in the water.

Hi Guru97FK8 , The tank does not lose pressure and the cap is sealing very well. The hot water going in and out to the interior is bypassed inside the engine compartment for a few years already. Thank you for those check points, I appreciate it.

Reading your article about the battery running flat after running short distances, Have you checked the charging rate at the battery. Something I have had a problem with is the crank pully damper. When these vehicles get to a certain age, I found the damper which is located between the outer pully on the crankshaft and the inner section mounted dirrectly on the crankshaft it's self. So, although the crankshaft is tuning the pulley, the damper is slipping. This would cause the altinater charging problem and the coolant circulation problem.

I will certainly check that because I never even new or considered that possibility. Thank you for that. I had to send my Bantam to a Garage to replace the head gasket due to overheating and should have it back today, then I need to make sure the cooling control works 100% and the charging. The experience getting advice from Car Gurus was amazing. Thank you all, I appreciate your kindness and willingness.

Today I checked the Cam sensor because it still starts with difficulty. I saw that the sensor switch impedance rises 9 ohms for a second when I move a piece of metal over the front end and goes back to closed. It does not stay open when I hold a piece of steel in front of it. When nothing moves past the sensor head, the sensor switch is closed. I checked to see if there is any voltage on the plug terminals, but it was zero, even with the ignition switch on. I even managed to start with great difficulty with the Cam switch plug off. My question is, should there be a voltage present? If there is no voltage, what then? The battery charges perfectly, so it is not battery related.

With both the Cam Position sensor and the crank position sensor, these create AC current and if you look at them on an oscilloscope, they fluctuate from positive to negative creating A/C current. The CPS will have 36 minus 1 teeth on the toothed rotor and the newer ones 36 munis 2 teeth so on the oscilloscope you will pick this up. Move the CPS wiring away from the starter solenoid wiring as this could enduce current. Check also the current draw on the main starter cable. If it is drawing too much current it will prevent the correct voltage from getting to your PCM. Remember , on these two sensors, you are measuring A/C Voltage and not D/C.

Thanks, this makes a lot of sense. I will go into this right away. 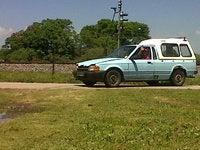 Looking for a Used Bantam in your area?