Alternator good but will not charge battery

Had the alternator checked.  It is good but will not keep battery charged.  I was told maybe an fuse link (?) or a fuse (?).  Where would I look to find either of these.  Thank you

Would do a load test on battery there may be a bad cell. Other thoughts are clean all the contact areas and inspect for cracked wiring Starter, alternator, and battery posts. Sometimes the alternator will put out some juice but not enough.

DylanPackard answered about a year ago

Dose your truck have a solenoid on the finder?

DylanPackard answered about a year ago

GuruXVTV1 answered about a year ago

I have a 1999 Ford F-150 pick-up truck that basically had the same issue. My battery was good and my alternator was good also. In fact, my alternator had a different issue in that the rear ball bearing were going bad, so I ended up replacing it. Since it was under warranty, the auto parts store had to give me a higher amperage alternator since they were out of stock on the regular alternator. In fact, they even tested the new one because the "new" replacement was bad. In any case, this issue of the alternator not charging the battery was a huge puzzle to me. the only way that I could drive my truck was to make sure that the battery was charged every time I wanted to use it. So after a week or so, I finally came up with the answer after doing some research on the Internet. Someone suggested that the vehicle could have a blown fuse. So I got out my owner's manual and began to look to see if any of the fuses in the box were blown. None on the inside fuse box were blown, but fuse number 11, which is a 20 amp mini fuse, and listed for the alternator field was blown. Since I didn't have one, I went to my local parts store and picked up a variety pack for just under $5.00. After replacing the 20 amp fuse, I restarted my truck and wouldn't you know it, the battery indicator light on the inside went out and using my battery tester, my truck was now charging above 12 volts. Furthermore, after taking it for a test drive, I have not had an issue since. So, if you're having a problem with your vehicle not charging and you very certain that your battery is good and your alternator (and all wiring) is good, check for a blown fuse. I actually can't believe that was the whole problem And, I literally saved my self a lot of money by trying to rule out every possibility before going to a licensed auto mechanic. 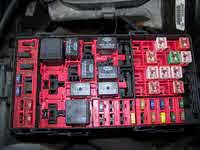 Open hood...look on driver's side and there is a fise box on the firewall...about halfway down there should a fuse clisest to You check to see if it is blown...it will not allow the alternator to charge

Test that fuse I overlooked it 4 times pulled it looked at it doesn't look blown but tested it .2 volts replaced it and now it charges