if you have a pass though in the back seat, open it. look in the trunk area with a flashlight for the trunk release up above. it is a glow in the dark handle.

pull back seat out- crawl in thru interior- will be pull cable right by trunk lock.... owners manual will show procedure. if necessary i can fax you picture off my alldata. I own a transmission shop and have that software program. craig burnett ... am in oklahoma.

There is a switch in the glove compartment that may be switched over to valet parking . If it is your trunk will not open.

I took mine to a cad dealer lin san diego and they used rod thru back seat to open. When i got back home and looked on internet and the told me about valet switch in glove compartment. I must have hit it accidentally. three service people at cad never mentioned that at all. By the way when the valet switch is on your garge door opener will not work. So much for the experts. Jerry, mark etc thank you much. It would be to long story to tell you what i went through to get clothes out throght little hole in back seat. Thanks again. one more time the internet is a powerful tool with a lot of very smart people. Bill SAn Diego

I was having that same issue where my trunk wouldnt open on my 2006 caddi dts. I looked in the glove compartment and found that the valet switch was on. I turned it off and i was able to pop my trunk...

My trunk won't open in my 2005 sts, I'm a mechanic but yet I'm stumped I know about the valet switch in the glove box and once it is on you can't open your trunk or your gas cap and ext. But I've flicked it on and off many of times and yet nothing, so I worked my way to the wiring went all the way through and couldn't find anything so then I thought fuses of course! and to my luck of course that's not it. Once I open the trunk and the trunk lid is up it will click like it's supposed to when I press the button on my fob/trunk relese. Once I close the truck nothing happens. The fob and trunk relese won't work so I'm stumped just seeing if anyone has an answer.

Thank you. What an easy fix. I pressed all buttons in my car while trying to figure out why it won't start (found out my ground wire has been severed so I am now off to replace the ground, hopefully). I was going to get my daughter to crawl through the tiny opening to get the trunk popped open. Thank you comes from her as well.

How can I open the trunk from my Cadillac deville 2003?

GuruZM8YS answered about a year ago

where is my trunk release in my 2011 srx

2004 cts, trunk won't electrically (button on door or fob button). When the trunk is open the actuator will click like it's supposed to when using the fob. Once the truck is closed nothing happens (same symptoms as goddammit reported 2 years ago). Removed the actuator from the trunk lid and jumpered directly to the car battery – worked fine. Noticed when replacing it that the actuator would not click (when unlocked) unless it was physically touching metal (ground). Could close the latch with a small screwdriver with lid open – would not work. With latch open, the trunk light would come on, and a light came on. Deduced the light was back-feeding ground to the actuator. When the latched was in the locked position the copper spring/switch for the light would open and remove the back-fed ground. Jumpered a ground directly into the connector to verify. Latch would now work correctly. Answer: Open ground (cut) wire in harness, roughly 6 inches from anchor to trunk lid. Cause: A 6 inch piece of round hard plastic in the harness. Presumably to prevent flex failure of the wires. See picture of the plastic in my profile. I did not replace the plastic stiffener in the harness 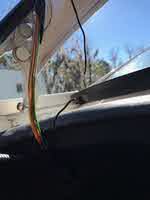 The hard piece of plastic found in the harness 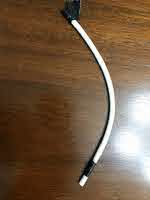 Close-up of the sharp end that cut the wire 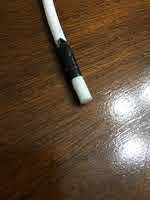 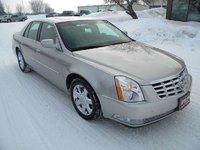 Looking for a Used DTS in your area?